The Garden City Movement was invented by Sir Ebenezer Howard (1850-1928) (Couch, 2014). It was first described in his book Garden Cities of To-morrow, published in 1902(Ebenezer Howard, 2014). The Garden City Model introduced the application of some basic planning principles which are still in use today. It consists of self-sufficient communities surrounded by greenbelts with planned proportionate areas in agriculture, housing, commerce and industry (Audiopedia, 2014). This essay discusses the creation and development of the theoretical and planning principles of the Garden City Model and its success in solving economic and social problems of densely populated cities in UK. It also discusses the modification of these principles and their applications in modern planning theories.

The search for an ideal city was due to the intense industrialization and resulting urbanization of major UK cities about the late 19th century. There were many social, economic and commercial activities in large cities, thereby causing high levels of migration from less developed regions in the UK towards these cities. This excessive immigration resulted in issues like; overpopulation, housing shortage, high rents, air pollution, urban slums and lack of sunlight and open spaces (Howard, 1902). According to (Fishman, 1982), Howard perceived the economy to be corrupt, inhumane, inefficient and unhealthy(see Fig 1,2). 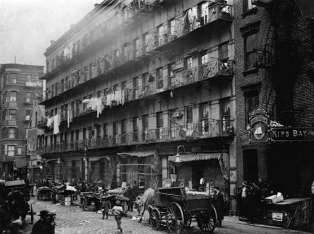 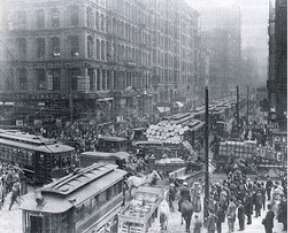 Analyzing the issues developed by the rapid urbanization, Howard noticed a contrasting phenomenon in the

countryside. The countryside suffered from; depopulation, lack of amusement, lack of society, capital and labour.

The town had all that the country was lacking and vice-versa. Howard then sort to combine the best aspects of

the town and the country in formation of the garden city (Ebenezer Howard, 2014). 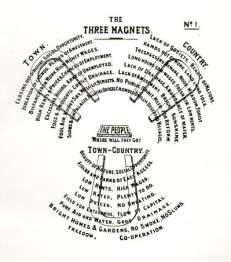 Redefining the town and countryside as magnets, the people as needles, and man’s socio-economic desires

as attraction, Howard realized the theory of The Three Magnets, introducing the third alternative; the Town-Country Magnet (Howard, 1902).The Town- Country offers; high wages, social opportunities, and places of amusements, healthy living conditions, low rents, and large parks (Howard, 1902). Howard believed that the Town-Country would enhance the enjoyment of human society and the beauty of nature simultaneously (Fishman, 1982).

In order to achieve the socio-economic aspects of the Town-Country, the ideal city would run by communal land ownership, whereby, the rent would be the main source of revenue, employed by municipality(governing body) in the creation and maintenance of public amenities, old age pensions, and accident insurance (Howard, 1902). The Garden City was to be built from scratch on agricultural land, which had low ecological value, thereby increasing the value of the land, so that it could generate significant revenue through rent for municipality (Howard, 1902). 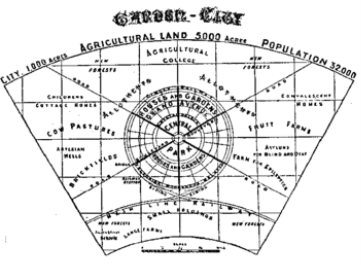 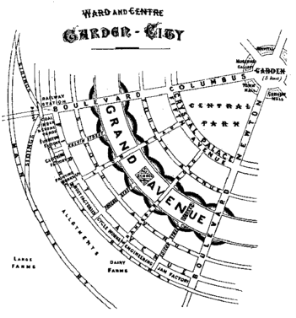 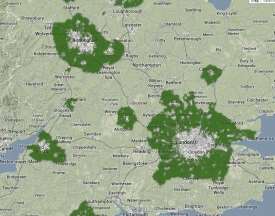 Although the Garden City Model is very descriptive, it is not a morphological but rather socio-economic illustration of principles (Butcher, 2010). Planned in a concentric pattern, with six radial boulevards, on a site of 6000 acres, the Garden City would have a population of 32,000 people (Audiopedia, 2014). In the centre of the city lies a public garden, surrounded by the public buildings which includes; hospital, library, museum, picture-gallery, town hall, concert hall and theatre (John, 2014). The succeeding space is the central park for recreational activities. These large parks are more of country features, but they perform much better in the town-country because of the increment in population. Beyond the central park is the crystal palace a circular glass arcade, for commercial activities (John, 2014). Placement of the crystal palace beside the central park shows Howard’s intentions of connecting human activities with nature. Before the invention of Howard’s principles, commercial zones in the cities rarely had parks and open spaces, because of the high value of land. It is now a common planning practice today to have open spaces in commercial areas. Beyond the crystal palace are houses with tree lined streets, additional parks occupied by public schools, playgrounds and churches (John, 2014). On the outskirts of the city are industries with direct access to the railway, saving cost of packaging and cartage and transportation of goods from the train to and fro factories (John, 2014). The rest of town beyond the railway is utilized as agricultural land held by various individuals and organizations and also providing alternative farm job opportunities to the working class without separating them from the city (Howard, 1902). This agricultural land also serves as a barrier to urban sprawl, as it cannot be built on. As shown in Figure 6, the use of green belts to control urban sprawl is still evident in UK cities today. 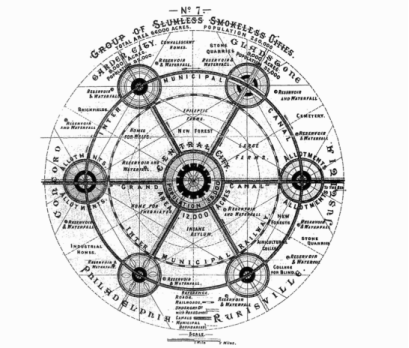 Considering the fact that town country community is bound to reach its population capacity due to its socio-economic advantages, Howard envisioned as series of garden cities, separated by green belts and connected by roads and railways, with the central city having a population of 58000 (see Fig.7). The introduction of these series also controls the excessive migration to cities with more attractions. 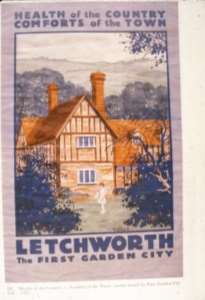 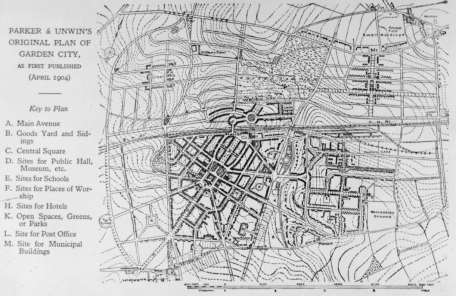 Howards Garden city model was directly experimented on two towns; Letchworth and Welwyn Garden City. Letchworth was the first Garden City ever built (Ebenezer Howard, 2014). It lies on a train line, 35 miles from London, located in Herdfordshire, England, and it covers an area of 5,500 acres, which used to serve as agricultural land with little or no value (Ebenezer Howard, 2014). Although Letchworth was not designed in a regular concentric pattern, it follows the zoning principles of the Garden City Model. In other to build Letchworth, Howard needed funding, but he did not get any financial support from the government. I suppose it was because the development of his ideal city had no positive effect on the pre-existing cities, which have been invested heavily upon. The idea of destroying or ignoring pre-existing cities to rebuilt perfect ones was also the basis of many other revolutionists in solving the industrial crisis. This approach displays the lack of consideration of the financial requirements in the realization of ideal cities. According to Audiopedia (2014), Howard got financial support only from private investors who were concerned with their personal profits, rather than the communal growth of Letchworth City. As a result, Howard forwent the idea of communal land ownership with no landlords (Audiopedia, 2014). 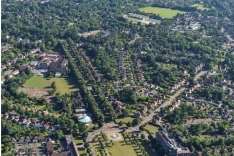 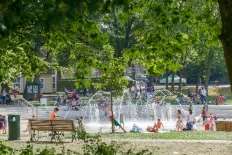 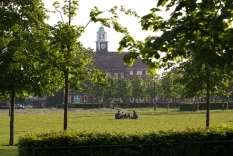 Letchworth was environmentally successful, with lots of open spaces and public parks healthy living conditions and beautiful tree-lined streets, most of which remain today (Letchworth Garden City Heritage Foundation, 2014). The city attracted firms because of the cheap rent and surplus space, resulting from its earlier use as agricultural land. It also attracted residents, as the living conditions were favorable. Due to the fact that the implementation of communal land ownership was ignored, the rents were not cheap, they could only be afforded by skilled white collar workers (Audiopedia, 2014). Letchworth failed partially as an independent community because of the improved transportation system which made it easier to connect to London. Welwyn, the second Garden City, 20 miles from London, performed just as well as Letchworth, but it lacked public, commercial and industrial buildings, which caused it to depend heavily on London for socio-economic activities.

Due to the physical success of Letchworth, the principles of the Garden city were applied to various developments worldwide and in most cases it has been misconceived as the development of suburbs. The New Towns Act 1946, implement by the government after World War II. was inspired by the Garden City Movement (Audiopedia, 2014). The Act, involved the designation of land for the development of garden suburbs in U.K (New Towns Act 1946, 2014). The development of ne towns meant the suburbanization of cities, which was the antithesis to Howard’s theory (Audiopedia, 2014). Despite it’s contradiction Howard thoery, the New towns succeeded in offering healthy living conditions, and maintaining the population density, but they were not economically independent. 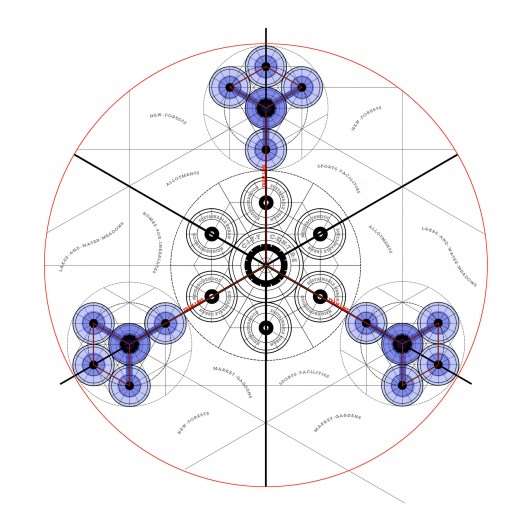 Recently, the Uxcester Garden City; an imaginary city, inspired by the Garden City Model, was announced the winner of the 2014 Wolfsons Economic prize (Sweet, 2014). It was initiated as a solution to the current U.K housing shortage crisis. It is a combination of the planning principles of the Garden City and the suburbanization scheme of the New Towns. Unlike, the Garden City, it is not built from scratch, but rather gradually incorporated into pre-existing cities. The scheme involves the development of residential communities on agricultural green belts, which are presently considered to have low ecological value (Sweet, 2014). 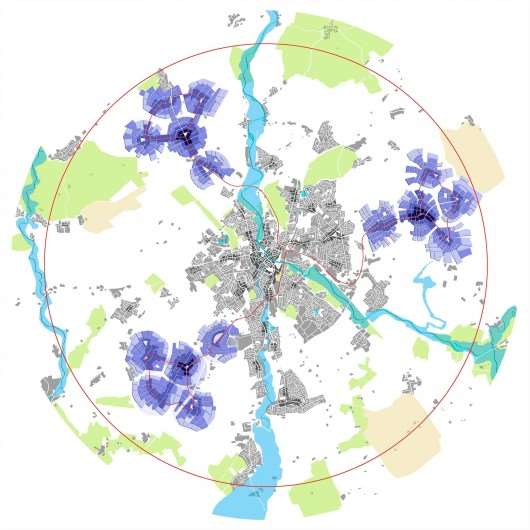 Each community is planned to have half it’s area designated to; forests, public parks and lakes (Sweet, 2014). These new residential communities would require reliable transportation systems, linking them to the city centre, which provides the most social activities. On the other hand, the new suburbs will revitalize the city centre by channeling new demand for what is on offer there (Sweet, 2014). Although the scheme involves suburbanization of cities, it observes the Garden City objectives, which includes the provision of healthy living conditions to ordinary people and socio-economic independence.

The Garden City Model inspired the New Towns Act and Uxcester Garden City. It has had a major effect on town planning, which has a direct effect on human behavior. Howard’s principles have recently been adopted in the development of Uxcester Garden City scheme for solving housing shortage problem U.K is facing today. Although the effect Uxcester will have on U.K. housing has not been decided, I think the further development of suburbs would either increase the lack of job opportunities or increase the volume of commercial buildings in the city centre. It will then be up to architects to ensure healthy working conditions in these city centres.