Skip to content
Notice :
2011 Japan Earthquake and Tsunami: Ethical, Legal, and Political Implications Tesco's Entry into China Ackerman’s Neoliberal Argument on the Causes of Corruption A company operating A Comparative Analysis of the Secessions of Iceland and Norway
Order Now
The Dinner Party is a mixed media feminist piece crafted by Judy Chicago and over four-hundred women consisting of ceramic plates, embroidered and woven table runners, woven entry banners, and painted china. This piece sits on a floor made of porcelain tiles which contains the names of 919 women in history. The construction of this piece started in 1974 and took five years to finish. This gigantic piece is on display in the Brooklyn Museum of Art. The structure of this masterpiece is a triangular table, forty-eight feet long on each side, that holds a total of thirty-nine place settings.[1] Each place setting represents a woman in history that has been widely recognized for her achievements. The three sides of the artwork signify women from different time periods. Looking at the piece from the picture below, the side to the right is wing one which covers women from Prehistory to Classical Rome. The back side is wing two which covers Christianity to the Reformation. Finally, the last side is the third wing which covers women from the American revolution until the Women’s Revolution.[2] Each plate has a sculpted or painted vagina, done in period style. Underneath each plate is a table runner that is either woven, embroidered, or a mix of the two, some even have special additions to the runners which will be addressed in the following paragraphs.
On wing one there is a place setting for the Primordial Goddess. The Primordial Goddess was believed to be the Goddess who created all of life. Her plate, like all the others is painted in the form of a vagina, this vagina in particular is suppose to represent the Goddess’ female genital organ as being the ground zero of all life on earth.[3]Â  Her table runner, along with some others, stands out among the crowd. The runner, while being embroidered with her name like every place setting, also has unborn calfskin stitched on top of the table runner with little white shells placed around the calfskin. The calfskin also helps represent the Goddess being the beginning point of all life.
Wing two holds the place setting for Saint Bridget, a woman born in 450 A.D. who built the first convent in her home country of Ireland after hearing St. Patrick speak. She continued to build convents all over the country and to this day Saint Bridget has many convents, buildings, and even a well named after her. Her plate is painted to represent a vagina, although the meaning behind the style and color is unclear. Saint Bridget’s table runner has a wooden cross fixed to the top to symbolize her devotion to Christianity.[4]
Caroline Herschel’s place setting can be found on wing three. Herschel was born in Hanover, Germany and is known for many things, all relating to the science of astronomy. Herschel moved to England to help her brother and became extremely interested in his study of astronomy. By the end of her life, Herschel had discovered eight new comets, 2,500 nebulae and clusters, and she had been appointed as her brother’s assistant to King George III; this made her the first woman in history to be recognized for her work in science. Herschel’s plate seems to be painted in the traditional colors of the night sky, representing her work with the stars. It can be theorized that the eye in the center of her plate could represent Herschel looking out at the stars, but this theory cannot be proven.[5]Herschel’s table runner is beautifully embroidered with the sun in the middle surrounded by symbols of astronomy and bright yellow stars. There are eight comet-like figures towards the top of the runner which represents the eight comets that Herschel discovered during her lifetime. Lastly, her name is embroidered at the bottom with the “C” in Caroline formed into a telescope.
The porcelain tiled floor contains the names of 919 important women in history whose names, unlike the thirty-nine women with place settings, went unmentioned throughout history despite their amazing achievements. The names include women such as Mary Shelley, the author who is most famously known for writing Frankenstein. Caroline Schlegel is another woman who is inscribed on the floor. She was deeply involved in the German Romantic Movement and is responsible for many letters and essays being translated in English.[6]
Created during the feminist movement, Judy Chicago’s The Dinner Party is a massive installation with an equally massive meaning. Women who accomplish a lot in their time often go unappreciated. Chicago did her best with the help she had to make sure that these women were no longer under appreciated. From the detailed genital plates to the equally detailed table runners, Chicago set out to make a statement and there is no argument that she hit the mark.
Word Count: 800 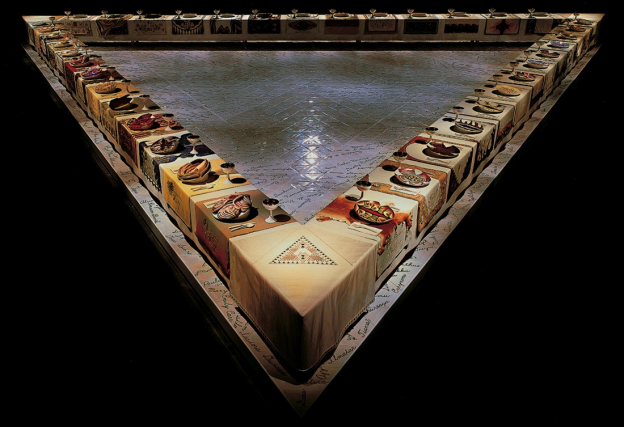