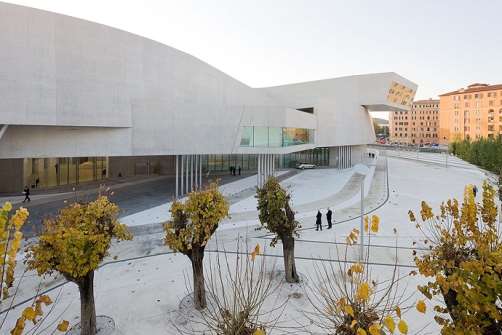 This report will focus on MAXXI National Museum and it will provide a comprehensive review of Contemporary museum architecture (built in Rome in 2009), designed by the Zaha Hadid Architects. As it was said in “Museums in the 21st Century”, there is no doubt to say that museum architecture seeks it’s development through the periods, divided into pre- and post-Bilbao eras. Bilbao’s buildings are a variety of architectural styles, ranging from gothic to contemporary architecture like Guggenheim Museum Bilbao (build in Spain in 1997) which gives the begging of contemporary Bilbao movement. Rome has no obligation to turn itself into a trendy modern city; its glory rests on the achievements of antiquity, the Renaissance, and the Baroque. In mid1990’s a new policy in Rome for ’the promotion of contemporary architecture’ has tried to change the architectural understatement by its city governments, policy with different aspects, views and cultural activities, with willingness for novelty. The foundation of the Maxi Museum was followed by international design competition combining all the new prospects. Hadid’s proposal is an impressive urban sculpture with dynamic and indefinite exhibition space. To construct this essay, and prove that MAXXI museum is an example of Modernism various sources have been researched. Therefore, its consistency includes Architectural concept and urban strategy, space vs object, Institutional Catalyst and Contemporary Spatiality. The essay was conducted in the form of a survey, with data being gathered via books “Lubetkin & Tecton: An architectural study” by Yoshio Malcolm Reading & Peter Coe (1992) , “Frank O. Gehry: The complete works” by Francesco Dal Co & Kurt W. Foster (1998) ,and the following articles “MAXXI Museum in Rome by Zaha Hadid Architects wins the RIBA Starling Prize 2010” by Levent Ozler, “ Zaha Hadid’s MAXXI – National Museum of XXI Century Arts” by Zaha Hadid Architects,” Starling Prize 2010 Goes to Zaha Hadid’s MAXXI Museum in Rome” (unknown author). 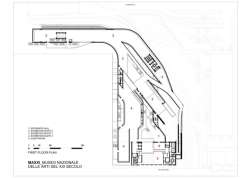 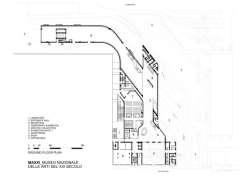 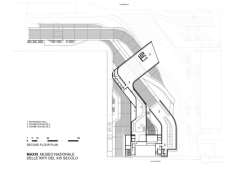 The early architectural modernism was indeed sudden break with tradition. Raise the banner of artistic simplification and geometrization, advanced substantiate this aesthetic slogan, ethical and political. The technique had become progressive character, and the machine – a metaphor.In the history of the foundation of modernism role has Berthold Lubetkin along with Le Coubusier second- generation well-known modernist. In 1932, Lubetkin formed the Tecton partnership including Gofrey Samuel,Sir Herbert ,Michael Dugdale ,Valentine Harding and Anthony Chitty . Main years of work for Tecton partnership were the period from 1932 till the outburst of the Second world war, and their work can be categorized in four departments: Apartments in north London, the work for Finsbury Borough Council, The zoo work and house projects. One of the picturesque projects commissioned to build after earned reputation from the designed Regen’s park (built in London, 1978) and Whipsnade zoo (built in Whipsnade in 1931) was Dudley Zoo. Its location is outside Birmingham, in town called Dudley opened in May 1937.The geometric character of building consisted twelve animal enclosures which despite the different functions of the buildings they formed relationship based on close connection between them which was an early modernist example in England. In another hand on the official page of MAXXI museum Zaha Hadid commented that “the museum should not be seen as an object, but as a field of buildings”. Another way to support the touch of modernism is connected with the concrete walls in Kiosks, smallest buildings in the zoo. Concrete is material typical for this period, and the same construction techniques are used in Maxxi museum. In that way is proven that Maxxi museum was part of the Modern movement (modernism). 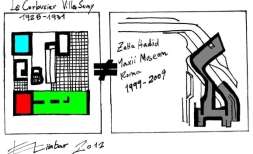 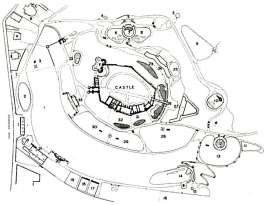 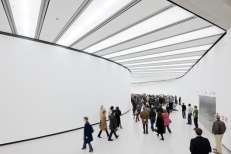 Another modernist for this period is half American half Canadian architect Frank Gehry. Among the well-known work of him is (built in Spain in 1997). The projected was funded and owned by Basque Country Administration, presenting good access for trade business. The internal organizations of the spaces are distributed in three floors. The central court of the building serves as unit point, with open view to the city. Different art galleries fill the spaces with purpose to expose temporary exhibitions, permanent exhibitions and art from living artist.The material for the exterior curved walls of the building is limestone and for interior is used plaster. Natural light is captured via skylights with the help of shades control during the day. And as Frank Gehry says for the unconsciously made curved walls “the randomness of the curves are designed to catch the light”. With this citation it is suggested that engineers along with the architect used scientific knowledge, one of the typical characteristics for modernism. In Maxxi museum the fluid and sinuous shapes, the variety and interweaving of spaces and the modulated use of natural light is leading to functional framework. By measuring all these important aspect in order to have this result and let the light to come into the building they highlight the function. Therefore MAXXI museum it was also used scientific knowledge. 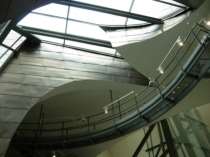 Once it was said by Frank Lloyd Wright’s that the perception “form follows function” implies the believes that it is design serve to its function. According to arcspace.com the main design idea of Maxi museum it is conected to the use of the building exhibition space for visual arts. Maxi museum walls crossing area and their interfaces define the interior halls of the museum and exterior.Because of the geometric abstraction in Maxxi museum “Form follows function”, we reach another characteristic of modernism.

Modernism introduces the concept of “truth to materials” which states that the building materials should be exposed rather than hidden and situated in the appropriate place. An example of this is statement is Maxxi museum. With its limited range of materials, such as the walls of exposed concrete or gray flooring using its shortcomings, it is constructed a sequence. On second floor and third, the touch of daylight can be sense over the glass roof supported by steel struts. They possess a mechanism that helps for the exhibition of paintings and sculptures which are not mounted to the floor. In that why Maxxi museum is modernist building.

Another architect of the modernism movement was Oscar Niemeyer. After his individual development in architecture and a series of projects in the city Belo Horizonte, he began to feel passion for oval shapes which links with his homeland, rivers and even woman’s body shape and concrete as a material for construction. The same materials are used in Maxxi museum, another good reason to support the evidence of Contemporary architecture.

Exposed concrete and glass we can see in Peter Behrens building called AEG.

Wassily Kandinsky was a Russian painter, who worked mainly in Germany and France. Kandinsky is expressionist and proclaimed himself for creator of the first abstract painting, despite concerns that it dates back to deliberate with an earlier date. His first works were abstract watercolor. His work in life passes through three stages: impression of external nature, improvisation and works compositions. Wassily works and lived initially in Munich and later in Russia, but because the conditions of Russian Communism – the censorship of totalitarian regime – was forced to emigrate. First assume teaching at the Bauhaus in Germany, after the closure of the school by the Nazis escaped to Paris. In 1933 by the National Kandinsky taught in Weimar, Dessau and Berlin, where he met with Russian constructivism. At that time, the geometry acquired superiority in his art. Forms which are reminding of microorganisms, but always depicting inner life of the Wassily. He used an unordinary color compositions imitating Slavic folklore. And mix sand with dyes to impart roughness colors. Accordingly to theguardian.com it mentions that Maxxi museum has different varieties of colors, such as: grey, black, white and wide range of cream mixtures of the exposed concrete. Our attention is grabbed, from the red abstract elements from the ceiling ,positioned in order to show the contemporary character of the building through color .Respectively of Wissily Kandinsky color theory based on abstract elements and forms ,we have proven our claim. 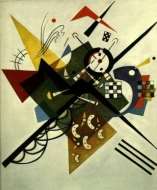 Modernism is period with highly advanced technological development .It categorizes the exposure of the structure, that’s why it could be called the period of Structural Expressionism. Hi-tech architecture creates new visual ideas, and the admiration for economical building constructions led to poor manufacturing quality. During the eighties it was difficult to differentiate this technological improvement from post–modern architecture. This is exemplified in the work undertaken by Richard Rogers and Renzo Piano, Centre Pompidou. As it was mention in archdaily one of the main design concept ideas was the typically structural uncovering for modernism. The building was dived with the help of color coding .Using this system it could be easily recognized the different components or area of the building. For example electrical mechanism was colored in orange and yellow, structures and stairs were painted in grey .In maxi museum we have exposure of staircase too, which led again to the thought that Maxi museum is modernist building. 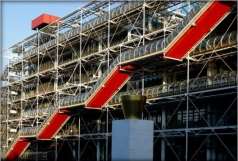 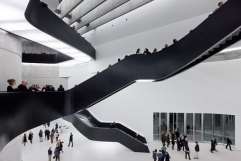 Le Corbusier is a French architect and it was born in Switzerland. He formulated his five principles of modern architecture, in which he remains faithful to the end of his life. The first principle is connected with columns – it separates the house from the ground through several supporting columns. The second principle is garden – he also uses gardens on the roof of buildings. The third principle is a small number of load-bearing walls. The fourth principle is widely glazing and the last fifth principle is free facade – exterior walls free from their load-bearing function. And based on those five point principles he adjusted one of his projects: Villa Savoye which has big influence over the modernism. With open plan and sequence of ramps, he dares the residents to go through the spaces constantly. In Maxxi museum the visitor are invited to enter into a series of continuous spaces, rather than the compact volume of an isolated building. So in both cases we have a unified space. 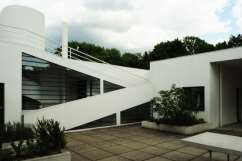 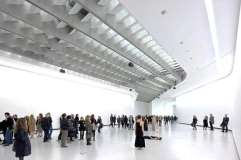 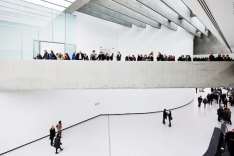 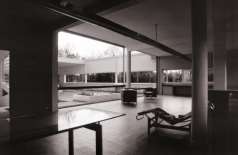 To sum up, the main goal of the essay was to determine and explain why Maxxi museum is contemporary building. Based on several perceptions typical for modernism, it was proven accordingly to the concept “Form follows function”, “Truth to materials”, unhidden structures and scientific knowledge. Maxi is a museum with numerous volumes and extension of lines, without center point, representing the circulation of images and ideas. Building is seen as a second skin of the city, responding to the environment, the building is seen as artistic s stretching drawing over the marvelous landscape.