THEORIES OF ARCHITECTURE AND URBANISM

Ar. Serina Hijjas is a 50 years old renowned local architect who has more than 20 years of experience in architectural field. She has done many high rise government projects in Malaysia and also participated in several international projects. Having an amazing architect, Hijjas Kasturi as her father, she was exposed to the architecture world earlier than any other architect. This has helped her much to develop her own design theory since young. She has also worked in Foster Associates for a few years in United Kingdom. Today, she is the director of Hijjas Kasturi Associates and also the foundingmember of Malaysia’s Green Building Index Technical Committee.

Menara Telekom, Kuala Lumpur is an office building designed by the father daughter Serina Hijjas and Hijjas Kasturi in year 1995, completion of building construction was in year 2001. Menara Telekom is an intelligent building rated with six stars for its design efforts on green element or sustainability. The tower is a 55 storeys high accommodates a working population of approximately 8000. It has a 1500 seat theatre and a large exhibition area under the foot of the tower. Since the client of the building – TM Malaysia is a provider of telecommunication services, this intelligent building has been designed to reflect their commitment on energy efficiency in the building management and maintenance system. To study Serina Hijjas’s personal attributes of architectural theory in the design of Menara Telekom, analysis and observation is done physically and intellectually to theorize and understand the architecture. 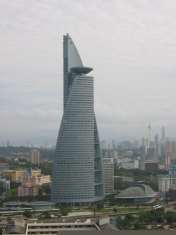 The first external contributing factor of Serina Hijjas’s design on Menara Telekom would be the climate. Malaysia receives abundant of sunlight throughout a year. Hijjas has carefully designed the building by orientating the office building to face the North and South side to avoid the occupants from receiving direct glare. To solve the penetration of sunlight from East and West, sky gardens are designed in between of the two office tower to shade the indoor spaces. The gardens provide the users of the building the comfort and convenient to go outside the building, away from the busy working floors, to humanize the working environment in this large structure. Besides, the South and North façades are installed with long and slim tinted glass window panels to reduce extreme glare from sunlight. At the same time, all the window panel on the building façade is also able to provide sufficient daylight to the office tower to reduce the energy consumption of the building. On the other hand, Serina Hijjas has done a great effort in designing a good air circulation in this building to allow the wind pass through the building fenestration. The air pressure theory is being applied on the sky gardens whereby hot air rises on the sky gardens (which received sunlight from East and West) causing high pressure, and the high pressure pushes the air creating a continuous air movement between the exterior and interior of building. Thus, the building is able to receive fresh air supply through sky garden and release exhaust air from air conditioner in the building to the outdoor through windows of the office tower. This careful design strategy of the sun and wind working together has brought great advantage to the Menara Telekom, making it an efficient intelligent building. The consideration of Hijjas on the orientation of building to the sunlight penetration and wind movement has shown her efforts on designing the building in response to the climate. 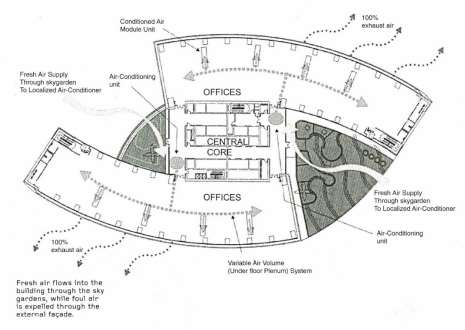 The second external contributing factor of Serina Hijjas on designing Menara Telekom is Regionalism. Regionalism is an architectural theory which embraces modern architecture but at the same time takes in the consideration of geographical context. Kenneth Frampton once said “it should be on topography, light, climate, on tectonic form rather than on scenography.” Menara Telekom is a modern building which contain metaphor of local element that reflects the identity of Malaysia. It is a visual translation of “bamboo shoots” into the form or shape of building. The bamboo could represent the identity of Malaysia because it is a common plant or construction material used in local. Not only with the building form that is able to reflect Malaysia’s identity, Menara Telekom is also responding to the surrounding context with its concrete façade which fits in harmoniously with the neighbor building on the site. The expression of building materiality shows the building respects the street context (most of the neighbor building are built using concrete) and stands on the ground in a humble way without overpowering the surrounding environment. Moreover, as one of the tallest building in Kuala Lumpur, Menara Telekom is designed to provide different element of visual forms, whether taller or shorter; slimmer or broader depending on different viewpoint from the street. For example, when someone is standing on the North and South, the full breadth of Menara Telekom is shown, creating a broader view; but when one is standing on the East and West, it looks slim and appear to be taller. This interesting visual perception has shown how much Serina Hijjas thinks about the visual experience of the people on the street. She knows it is important to consider the view from different direction when the building she designs is built this tall and many would view it from different way. Furthermore, the orientation of the building has been designed to respond well to the sunlight penetration and air circulation as what the climate factor explains. The sky garden is the strategy used by Hijjas to treat the hot East and West side. Moreover, the huge transparent wall under the canopy which marks the main entrance of the building, is designed to face the main road, Federal Highway as an inviting sign to welcome people to enter the building. Serina Hijjas’s design has responded well from site context to climate factor, making Menara Telekom a building that has regionalism qualities.

The third external contributing factor of Serina Hijjas’s design is socio-culture. Hijjas Kasturi Associates has an interest to design building using metaphor that reflects certain meaning. According to the lists of building that the firm has done, there are a few buildings being designed to symbolize something. For example, Maybank building in Kuala Lumpur symbolizes Keris (a Malay weapon and also an indicator of social status), The Pod which represents the droplets of Mother Nature (responded to the site context). Menara Telekom is no exception. Menara Telekom uses bamboo shoots as a metaphor to represent Malaysia’s Identity. In Malaysia, bamboo is a common and well-known plantation that is being used frequently. It can be used in various industry for different purposes such as construction material, design material, food, and many more. Menara Telekom is designed to represent the “bamboo shoot” of bamboo to convey a message whereby young bamboo has strong foundations at its root with its leaves unfurling one by one. This design concept is also often associated with the Malaysia artist Latiff Mohidin;s image of a pucuk rebung (bamboo shoot), but only the idea for a contoured form had to be balanced against technical limitations. Serina Hijjas designed the building in a way where she uses repetitive elements on the façade and floor plates in a tight core planning to achieve equilibrium but still maintaining the shape of a bamboo shoot. In short, the sculptural form of the building was developed by the design team to sought out a shape that can reflect the cultural identity of Malaysia, making the building an instant recognized skyscraper that people could see it as building that represents Malaysia. 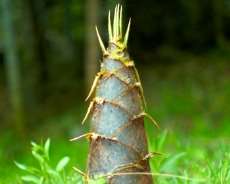 By looking on the three external contributing factors that have influenced Serina Hijjas in designing the building, it somehow shows that Serina’s design principal is inspired by her father, Hijjas Kasturi, and some experiences that she has gained while working at Foster Associates in United Kingdom. Serina Hijjas who always look up to her father since young has the same design intention as her father but she does it in her own way with the assist of more modern technology knowledge. Like her father, Hijjas Kasturi’s project, she always wanted to design building which suits the local architecture language whether by its look or its function but she includes energy efficiency and sustainability features into her design. This approach is important to her because as an architect who has been exposed to different foreign architecture environment (especially Europe where she spent most of her study time), she realized the importance to design a building that is thoughtful and responsible to the environment, making the building lasts longer on earth without causing harm. At the same time, she doesn’t neglect the need to move on from modernism to the post modernism thinking as she designs her building with more interesting elements in terms of form and materiality to break out the box of designing a “machine building”. It makes her an architect who has a practical design approach as basic design concept which is inspired by her father, and also has acquire the environment friendly quality in her building which has influenced her from her experience and realization while working overseas.

In addition, Serina Hijjas has always got her own design theory when designing a building in which she would emphasize the “lightness” of one building. By looking at the various projects done by Hijjas, it is shown that the reason of her on insisting having “lightness” element in a building is to make a building looks less massive and bulky. During the 1980’s when Serina Hijjas was working in United Kingdom, the building in the city at the time has shown various elements of post-modernism design incorporating with new advanced technology. The use of steel and glass has become another important feature to make a building looks modern and lighter. It was the time where the two famous new materials were introduced to the world and they received good response in architecture industry. Many people becomes fond with the new materials since then. Perhaps being influenced by the architecture trend in Europe, Serina Hijjas is using the “lightness” as one of her important design basis on her project until today to show her concern for Malaysia to follow the modern architecture pace in overseas once she came back working from United Kingdom. It is important for her to design a building which is less visual burden to create a feeling as if the building is breathing lively but not standing on ground massively, therefore she likes to play around with “lightness” element in her projects design. Besides, while applying lightness on her building design, the building of Serina Hijjas has portrayed another key feature where she never designed a building to overpower the context surrounding. It is a humble way of her to let the building respect the site context by using the same architectural language and element unlike some commercial building which is shouting for people to notice. It shows that Serina Hijjas is a considerate architect who thinks carefully on every possible factors that will not only influence the building itself but also the surrounding context.

In a nutshell, Serina Hijjas is an architect or a designer who portrays postmodernism qualities with energy efficiency and sustainability thought in her design that is based on “lightness” basis. As the daughter of the local legendary architect Hijjas Kasturi, Serina Hijjas definitely has the qualities that her father is famous for and she even make the effort to create her own way of expressing her architectural theory into her design. Her way of designing makes her absolutely one of a kind in Malaysia architecture industry.