Earth’s atmosphere is composed of air. Air is a mixture of gases of 78% nitrogen and 21% oxygen with traces of water vapor, carbon dioxide, argon, and various other components. Air is a uniform gas with properties that are averaged from all the individual components. Air at sea level static conditions for a standard day depends on the pressure and temperature of the location on the earth and season of the year. Gas is composed of a large number of molecules which are in constant and random motion.

Air pressure and temperature changes from day to day, hour to hour, and sometimes even minute to minute during severe weather. Standard value of air shown in the diagram are just average values used by engineer in assist to design and calculate machines. Gravity is the key important factor because it holds the atmosphere to the surface. As altitude changes, the state-of-the gas factors will change, which is why the typical values given are at static conditions – sea level. As altitude increases, air density, pressure, and temperature decrease.

There are general characteristics to describe wind, wind Speed and wind Direction, which create different types of wind. Examples of wind include breeze, which is a long duration of low speed wind; gusts, a short burst of high speed wind; strong immediate winds like squalls; and lastly strong intense winds like hurricane or typhoon. Wind speed is the velocity obtained by a mass of air travelling horizontally through the atmosphere. The common measurements for wind speed are kilometres per hour(kmph), miles per hour (mph), knots and meters per second by using a anemometer. The direction of wind is measured by an instrument called a wind vane.

There are two main that effect wind direction and speed

These factors work coherently to change the wind in different directions and at different speeds.

Pressure gradient force is the primary force influencing the formation of wind. Wind always blows from high pressure area to low pressure area on a horizontal gradient. Vertically, wind flow from low pressure area to high pressure area. This pressure gradient force that causes the air in motion and causing the air to move in motion with increasing speed down the gradient. Uneven heating on the earth’s surfaces causes the continual generation of these pressure differences. The greater the pressure difference over a certain horizontal distance, the greater the force and therefore, the stronger the wind.

On weather map surfaces, the variations of air pressure over the earth’s surface is indicated by drawing isolines of pressure, called isobars. 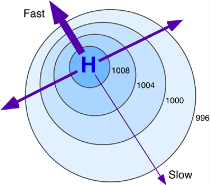 The rotation of the Earth creates another force, known as the Coriolis force which effects the direction of the wind and other object objects in motion in very predictable ways. Newton’s first law of motion – The law of Inertia, state that forces are balanced. Air will remain moving in a straight line unless it is altered by an unbalancing force. Instead of wind blowing directly from high pressure area to low pressure area, Coriolis force opposes the pressure gradient acceleration and changes the moving air direction. Wind is deflected to the right of the gradient in the Northern Hemisphere, while in the Southern Hemisphere wind is deflected to the left. 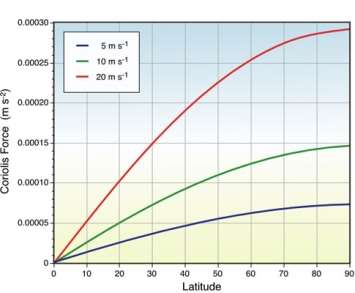 Friction is the last force that influenced both speed and direction winds. Friction is only operative only close to the Earth’s at about 2,000 feet above earth’s surface. Friction greatly reduces speed of surface air and reduces the Coriolis force. As a result, the reduced Coriolis force alter the pressure

Gradient force, to move the air at right angles across the isobars toward the area of lower pressure. Surface winds on a weather map does not blow parallel to the isobars in geostropic and gradient wind, instead surface wind cross the isobars vary at an angle from 10 to 45 degrees. Over the ocean where frictional drag is less, and reduced the angle to as little as 10 degrees.

Isolation precaution is an important strategy in the practice of infection control. The spread of some infections can be impeded if infected patients are segregated from those who are not infected yet. Although there is no single study showing the effectiveness of isolation.

The concept of isolation can be traced back to biblical times when lepers were segregated from the rest of the populace. Towards the end of 19th century, there were recommendations for patients with infectious desease to be placed in separate facilities, which ultimately became known as infectious diseases hospitals. However, in the early 1950s, many of these infectious disease hospitals closed and the patients were moved to general hospitals. The need for proper isolations of infections in the context of general hospitals thus become an important issue.

Spatial separation is critically important when using isolation precautions because many infectious airborne contaminations are spread mainly through direct contact when patients are near to one another. Special ventilation controls are required for diseases that can be transmitted over long distances by droplet nuclei (x). However, most diseases are not of this category. Proper isolation is critically important for infectious diseases that can be transmitted through long distance which can result in large clusters of infection in a short period.

Three level of controls must be considered when using isolation precautions. When setting up levels of control for isolation system in hospital, attentive attention must be given for the system to work effectively. Failure in doing so will result all three levels not working and supporting each other.

Administrative control is the first level of control measure that needs to be taken to ensure that the entire system proceed effectively.

“environmental and engineering controls” is the second level so isolation.

A negative pressure room in a hospital is used to contain airborne contaminants within the room. In the hospital is surrounded by harmful airborne pathogens include bacteria, viruses, fungi, yeasts, moulds, pollens, gases, volatile organic compounds, small particles and chemicals are part of a larger list of airborne pathogens.

Negative pressure is created by balancing the room’s ventilation system so that more air is exhaust out from the room than it is supply. A negative pressurize room is architecturally design so that air flows from the corridor, or any adjacent area into the negative pressure room. This is to ensure and prevent airborne contaminants from drifting to other areas of the hospitals and contaminating patients, staff and sterile equipment.

Rooms to be Pressurize Negatively

According to the 2014 FGI Guidelines and Standard 170-2013, there are a list of rooms in healthcare architecture that needs to be negatively pressurized.

In a well-designed negative pressure room, there should only be one source of air input to the room. Air is pulled through a gap under the door, other than the small opening, the room should be air tight as possible to prevent air from entering. Room must be regularly maintained to prevent any crack or opening in the room.

Healthcare centre are surrounded by pollutions, germs and airborne infection, and these can severely be hazardous to patients, healthcare employees and visitors when exposed. Visitors in healthcare centre are usually patients suffering from allergies, asthma, cardiopulmonary diseases, hyper sensitive to chemicals or having a weaker immune system and are seriously threatened by airborne micro-biological contamination could worsen their condition.

Room adjacent to a negative pressure room are positive pressure. Positive pressure in rooms is to ensure that airborne pathogens do not contaminate the patient or supplies in that room. Operation room are example use of positive pressure, which is use to protect the occupant and sterile medical and surgical supplies. The design intention of a positive pressure room is to optimize the condition for clean, invasive procedure, thus reducing infectious risks to patient. These rooms are often considered the cleanest room in a healthcare facilities.

“Ventilation” the common term use in contemporary architecture, and is an important factor in building design. Ventilation provide healthy air for breathing by moving outdoor air into a building or a room, and channels the air within the building or each respective room. There are three basic elements in building ventilation to be considered:

One of the fundamental aspects of architecture is to provide comfort to the inhabitant. This is done by wall insulating, heating, protecting from the sun and managing fresh air intake.Â  Natural ventilation enhances air quality by dissolution of pollutants and refreshing thermal comfort in building. Ventilation based on natural forces should always be preferred to mechanical ventilation especially in European climates, as it can efficiently complete comfort and energy objectives without mechanical energy consumption.

When wind flows around a building, it can produce a very high suction pressures. Pressure is induced on the building when wind strikes a building. Positive pressure on the windward face which is the direction of upwind from the building; negative pressure on the leeward face, pulling rather than pushing on the building. This drives the air to flow through windward openings into the building to the low-pressure openings at the leeward face. Windward pressure differs along the height of the building, while the leeward pressure is constant. These pressures occur mainly on the leading edges of the roof, and the cladding on these areas has to be firmly fixed to the structure and the roof has to be firmly held down.

Stack pressure or thermal buoyancy force is generated from the air temperature or humidity difference (sometimes defined as density difference) between indoor and outdoor air. This difference generates an imbalance in pressure gradients of the interior and exterior air columns, causing a vertical pressure difference. Air buoyancy allows movement of air into and out of buildings, chimneys, flue gas stacks or other containers. The effectiveness of stack ventilation is influenced by the effective area of openings, the height of the stack, the temperature difference between the bottom and the top of the stack and pressure differences outside the building.

There are two effective uses of stack ventilation which occurs in a room and stack effect in a high-rise building. Examples two different uses are given as below.

Example use of Bernouli’s principle are wind cowl’s and wind tower which utilizes the faster winds above roof tops for passive ventilation.

Fast roof top wind is scooped into the building through the intake valve and at the larger outlet valve creates lower pressure which naturally suck the air out. Stack effect will also help to pull air out through the same exhaust vent.

Designing for stack ventilation and Bernoulli’s principle are similar, and a structure built for one will generally have both phenomena at work. In both strategies, cool air is sucked in through low inlet openings and hotter exhaust air escapes through high outlet openings. The ventilation rate is proportional to the area of the openings. Placing openings at the bottom and top of an open space will encourage natural ventilation through stack effect. The warm air will exhaust through the top openings, resulting in cooler air being pulled into the building from the outside through the openings at the bottom. Openings at the top and bottom should be roughly the same size to encourage even air flow through the vertical space.

To design for these effects, the most important consideration is to have a large difference in height between air inlets and outlets. The bigger the difference, the better.

Towers and chimneys can be useful to carry air up and out, or skylights or clerestories in more modest buildings. For these strategies to work, air must be able to flow between levels. Multi-story buildings should have vertical atria or shafts connecting the airflows of different floors.